On Thursday, November 6, 2014, the “Fonds du sport et du loisir sherbrookois” held its 17th cocktail benefit at the Granada Theatre under the honorary presidency of Sebastien Morin, vice president of Immex Société Immobilière. Eric Lucas, former world boxing champion and businessman from Magog, was the special guest and he spoke about his sport and life experiences in an interactive form with the host of the evening Raymond Duquette.

Immex is proud to be partner of the evening and the Fund who has distributed over $ 40,000 this year to young people from families in need. The costs of enrollment of over 350 children and adolescents were paid for so they can practice their sport or favorite activity.

“We made it a point to never refuse an application. We must speak of the existence of the Fund, not only to raise money but also to ensure that all interested young people know they can make a request. So the moment of a training or activity with their sports uniform or scout, all children are equal, “recounts Fund President, Eric Bergeron. 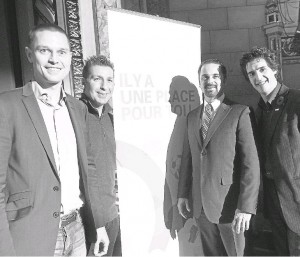